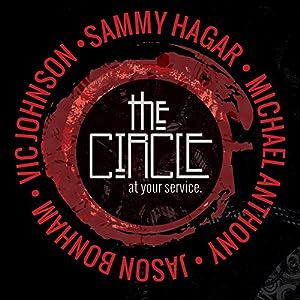 $12.48
As of 2021-07-21 16:45:21 UTC (more info)
Not Available - stock arriving soon
Buy Now from Amazon
Product prices and availability are accurate as of 2021-07-21 16:45:21 UTC and are subject to change. Any price and availability information displayed on http://www.amazon.com/ at the time of purchase will apply to the purchase of this product.
See All Product Reviews

Sammy Hagar and The Circle announce their debut live double album "At Your Service" set for world-wide release on May 19th, 2015.

"At Your Service" captures these 4 artists jamming on 19 legendary tracks that span more than 40 years of rock music history.

The Circle features Michael Anthony, the renowned rhythm section bassist who has played with Sammy for the last 30 years in bands including Van Halen and Chicken Foot. Vic Johnson, Hagar's longtime guitar virtuoso who seemlessly shreds through his own, as well as some of rocks most iconic guitarist's riffs. Jason Bonham, the acclaimed drummer and son of iconic Led Zeppelin drummer, John Bonham.

only $2.86
Not Available
View Add to Cart