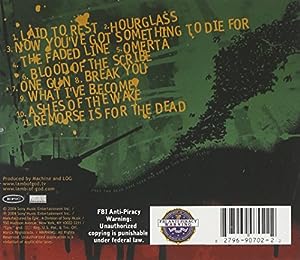 $3.45
As of 2021-06-19 02:50:25 UTC (more info)
Not Available - stock arriving soon
Buy Now from Amazon
Product prices and availability are accurate as of 2021-06-19 02:50:25 UTC and are subject to change. Any price and availability information displayed on http://www.amazon.com/ at the time of purchase will apply to the purchase of this product.
See All Product Reviews

Major label debut from highly talked about Metal band from Richmond Va. CD contains enhanced exclusive in-studio video. Currently attracting a lot of "buzz" on the 2nd stage of Ozzfest (there is one every year that creates the most hubub & they are it). Playing to crowds of 5,000 plus each night touring through September & signing copies of their independent release at the Ozzfest booth to great response. Alternative Press named them the band #3 in their "Most Important Metal Bands" poll. Guitarist from Megadeth featured on lead track "Laid To Rest".

"Violence begins to mend what was broken." Boy, how he does it. Choosing not to borrow the pinky ring flash of the Underworld and but rather good old fashioned eye for eye justice, singer Randy Blythe croaks savagely though "Omerta." Backed by a healthy dose of lumbering menace, the song is sung as if by vengeance itself. Violence begetting violence is a constant on this album, both in music and word; in both personal trial and world politics. Lamb of God have show their 80's thrash roots on Ashes of the Wake by featuring solos from both Testament and Megadeth. The band plows forward taking from the new, the old, and adding their own stamp--heavy, angry, and political. --Daniel Mahon

Skeletons in the Closet

LIVE - Back To The Roots