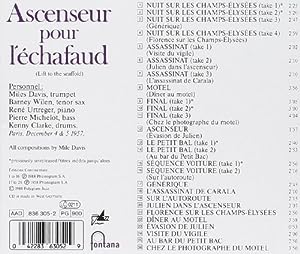 $7.50
As of 2021-06-22 03:30:00 UTC (more info)
Not Available - stock arriving soon
Buy Now from Amazon
Product prices and availability are accurate as of 2021-06-22 03:30:00 UTC and are subject to change. Any price and availability information displayed on http://www.amazon.com/ at the time of purchase will apply to the purchase of this product.
See All Product Reviews

Unavailable in the U.S.! Miles Davis' moody, evocative music for the Louis Malle movie (translation: The Lift To The Scaffold) comes in two different forms on this reissue. There is a chronological sketch pad of tracks which didn't appear in the original release, or appeared in altered form, and tracks 16-26, which comprise the body of the original release, complete with the odd dollop of post-production echo to italicize the film's dramatic content. Recorded on December 4-5, 1957, the music for the film has an elegant, romantic air to it. In the company of such French jazzmen as Pierre Michelot and tenor saxophonist Barney Wilen, this soundtrack is something of a throwback to the feel of Miles' early '50s Blue Note recordings with drummer Kenny Clarke. Rarely has Miles' open tone been more poignant, and that bittersweet quality probably owes something to Miles' ongoing affair with the film's leading lady, Jeanne Moreau.

Performed by a Miles Davis-fronted European band for a movie by Louis Malle, this music helped define the sound of film noir. It made viewers think the genre's films had always sounded just so, with slow-walking bass beats and muted, slithering horn lines miming the characters on the screen--and underlining their emotions. The melodies here are brief fragments, sometimes rising up only to disappear and then briefly return. This is Miles playing in the moment, improvising musical impressions as he watched the screen. And what he played managed to capture the era of postwar everywhere, while it offered Davis the freedom to test his on-the-spot compositional skills within a minimalist context. How many other beboppers who worked within the shadow of Charlie Parker could have ever recorded these little gems? --John Szwed

Films About Ghosts: The Best of