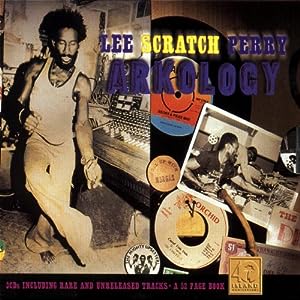 $12.65
As of 2023-02-01 16:47:32 UTC (more info)
Not Available - stock arriving soon
Buy Now from Amazon
Product prices and availability are accurate as of 2023-02-01 16:47:32 UTC and are subject to change. Any price and availability information displayed on http://www.amazon.com/ at the time of purchase will apply to the purchase of this product.
See All Product Reviews

As the first producer to use the drum machine, as the creator of the dub and the shaper of the modern reggae sound, Lee Perry has altered the course of recorded music-and of rock, hip-hop and rap-since his Black Arc Studios opened in Kingston, Jamaica in 1974. Among the 52 tracks recorded there and included here are songs by Lee Perry and the Upsetters, the Congos, the Heptones, Junior Murvin, the Meditations and more. Plus, a 52-page booklet with photos, essays and archival material!

The nearly four hours of astounding music encoded on these three discs merely scratch the surface of the highly personal sonic universe created by this legendarily eccentric, yet ridiculously prolific, dub-reggae producer. It's still the best source of entry into Lee "Scratch" Perry's world, though, a place defined by homemade avant-garde production techniques applied to the wittiest, angriest, sexiest, and most soulful reggae tunes ever written. Perry was born in 1936, and his career spans the history of Jamaican music. These 52 tracks, however, derive mainly from the late 1970s, when he was at the height of his considerable powers and recording hits like Max Romeo's "War in a Babylon" and Junior Murvin's "Police and Thieves" for Island. Helpfully annotated, with a healthy handful of unreleased tracks, Arkology is a beginner's banquet of tracks that sound increasingly deep, daring, and downright frightening as the depth of Perry's talent is plumbed. --Richard Gehr