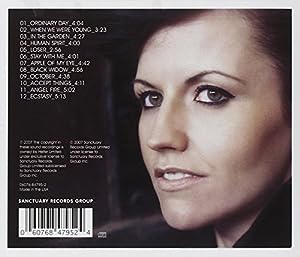 $9.98
As of 2021-02-21 22:01:15 UTC (more info)
Not Available - stock arriving soon
Buy Now from Amazon
Product prices and availability are accurate as of 2021-02-21 22:01:15 UTC and are subject to change. Any price and availability information displayed on http://www.amazon.com/ at the time of purchase will apply to the purchase of this product.
See All Product Reviews

2007 solo debut from the former Cranberries vocalist. Written and recorded in Dublin and Canada and featuring production from Dan Broadbeck and acclaimed musician/producer Youth, whose many production credits include Paul McCartney and U2. The album was written and inspired by her personal experiences over the last four years including her marriage, the birth of her third child and the death of her mother-in-law. 12 tracks including the first single 'Ordinary Day', 'Loser' and 'Apple'.

It's been a long wait for the solo debut from Irish icon Dolores O'Riordan. After all, the Cranberries issued their swan song in 2001. After their break up, O'Riordan collaborated with Germany's Jam and Spoon, Italy's Zucchero, and David Lynch composer Angelo Badalamenti. She also appeared, as herself, in the 2006 comedy Click. All the while, she toiled away on her first solo effort. Fortunately, good things come to those who wait. Co-produced by Youth (the Verve, U2), Are You Listening? is a throwback to 1980s-era Siouxsie and the Banshees and Sinead O'Connor--sweeping keyboards, forceful drumming, and muscular guitar work. It may seem like a melodramatic move, but the music never overwhelms the slight yet steely figure at the center of the maelstrom, particularly on the lilting "Ordinary Day" and haunting "Black Widow." Cranberries fans expecting something more demure may be taken aback, but O'Riordan's supple voice should win over most skeptics. And lyrically, she compensates with tender words inspired by her husband ("Apple of My Eye"), the death of her mother-in-law ("Black Widow"), and the birth of her youngest child ("Ordinary Day"). --Kathleen C. Fennessy

More from Dolores O'Riordan and the Cranberries

only $5.13
Not Available
View Add to Cart

As the Eternal Cowboy [Vinyl]