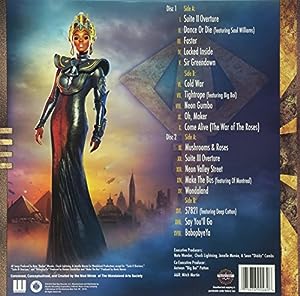 $19.99
As of 2021-02-28 04:25:12 UTC (more info)
Not Available - stock arriving soon
Buy Now from Amazon
Product prices and availability are accurate as of 2021-02-28 04:25:12 UTC and are subject to change. Any price and availability information displayed on http://www.amazon.com/ at the time of purchase will apply to the purchase of this product.
See All Product Reviews

Wondaland Arts Society/Bad Boy recording artist Janelle Monáe has announced the release of her eagerly awaited debut album.
'The ArchAndroid' is an 'EMOTION PICTURE' brought to you by Janelle Monáe and the Mad Minds of the
Wondaland Arts Society. The star-studded featured cast includes the legendary Big Boi of OutKast, renowned poet Saul Williams, psychedelic dance-punk troupe Of Montreal, punk prophets Deep Cotton, and the Wondaland Arch Orchestra.
The album was recorded at Wondaland Studios in Atlanta, but written all over the world, including but not limited to Moscow, Prague, Istanbul, Berlin, Amsterdam, New York, and the Palace of the Dogs. 'The ArchAndroid' was inspired not only by the energy of these places, but by such revolutionary musicians and artistic visionaries as Salvador Dalí, Walt Disney, OutKast, Stevie Wonder, Octavia Butler, David Bowie, Andy Warhol, and John Williams. The album was Executive
Produced by Nate Wonder, Chuck Lightning, Janelle Monáe, and Sean 'Diddy' Combs, with Co-Executive Production from Big Boi of OutKast.

Nothing Was The Same (Dlx/Exp) from Cash...

only $1.95
Not Available
View Add to Cart