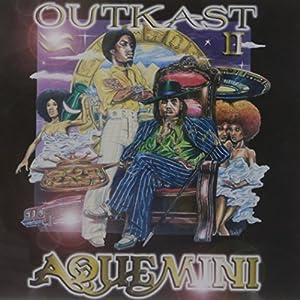 $5.68
As of 2022-08-18 09:15:19 UTC (more info)
Not Available - stock arriving soon
Buy Now from Amazon
Product prices and availability are accurate as of 2022-08-18 09:15:19 UTC and are subject to change. Any price and availability information displayed on http://www.amazon.com/ at the time of purchase will apply to the purchase of this product.
See All Product Reviews

It takes a few listens to sink in, but on Aquemini, Outkast have pulled off a rare feat in hip-hop: they've made a good record that's a masterpiece of subtlety. What's more, it's their third record, and they've yet to fall into a rut--and that alone puts them in line for an award. The Organized Noize production crew is sublime, working with live musicians and crafting hook-filled soundscapes that complement Big Boi and Andre Benjamin's melodic patter. (See "Rosa Parks," "Chonkyfire," and the epic "Liberation," which features Erykah Badu, Cee Lo, and Big Rube--and clocks in at just under nine minutes.) Classy and intelligent, Outkast haven't sacrificed anything in their quest to make challenging, innovative hip-hop that forgoes idle boasting for the duo's message. A sample, from the title track: "Now, question: Is every nigga wit dreads for the cause? / Is every nigga wit golds for the fall? Naw / So don't get caught in appearance." --Randy Silver