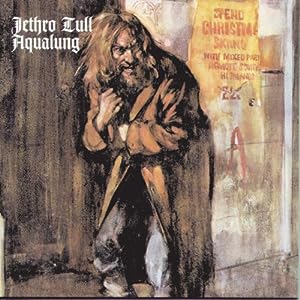 $5.61
As of 2021-04-19 07:11:07 UTC (more info)
Not Available - stock arriving soon
Buy Now from Amazon
Product prices and availability are accurate as of 2021-04-19 07:11:07 UTC and are subject to change. Any price and availability information displayed on http://www.amazon.com/ at the time of purchase will apply to the purchase of this product.
See All Product Reviews

After veering sharply from the blues inluences of their debut, This Was, Jethro Tull's sound quickly coalesced around jazz-tinged English folk influences and the antics of frontman/flautist Ian Anderson. But it was guitarist Martin Barre's swaggering riff off the title track of the band's fourth album that would become Tull's indelibly clichéd trademark--and the band's entrée into a long reign as arena-rock perennials. But there's a lot more to Aqualung than the riffage of that cut and its cousins, "Cross-Eyed Mary" and "Locomotive Breath." In an era when pseudo-Christian spirituality was a de rigueur, if cheap, musical commodity (from the overblown operatics of Jesus Christ Superstar to one-hit pop wonders such as "Spirit in the Sky" and "Put Your Hand in the Hand"), Anderson and company openly challenged the value of organized religion with a thematic album savvy enough to layer its thought-provoking lyrics between heavy strata of FM-friendly guitar bedrock. A cliché, perhaps; a landmark, no doubt. And a record many maintain is still Tull's finest hour. --Jerry McCulley

s of the World [Vinyl]