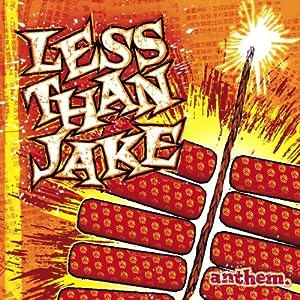 $33.75
As of 2022-11-22 23:15:22 UTC (more info)
Not Available - stock arriving soon
Buy Now from Amazon
Product prices and availability are accurate as of 2022-11-22 23:15:22 UTC and are subject to change. Any price and availability information displayed on http://www.amazon.com/ at the time of purchase will apply to the purchase of this product.
See All Product Reviews

Less Than Jake has been one of punk's favorite bands for a decade. Thanks to incessant touring (200-plus dates annually, including with Green Day, No Doubt, Blink 182, and A.F.I.) and multiple record releases, the punk'n'horns group has built a phenomenal cult following. Voted Indie Band of the Year by Kerrang! Gainsville, Florida's Less Than Jake flies the banner of the New Punk South with it's debut Sire album Anthem.

The firecrackers on the sleeve give a good idea of what to expect on this Florida ska-punk group's third major-label album after a brief sojourn back in the indie world. Horns, chugging guitars, and crashing rhythms mesh to create a high-energy racket that refuses to subside until the band has rolled out its raucous closing cover version of Cheap Trick's "Surrender." The label turbulence does little to affect its angular wit, as focus returns to the heady party vibes of the group's hugely successful major label debut, Losing Streak: pogo-driven "Best Wishes to Your Black Lungs" and "That's Why They Call It a Union" are standard-issue Less Than Jake. As with the band's other releases, the music inspires clear feelings of love and hate. --Aidin Vaziri