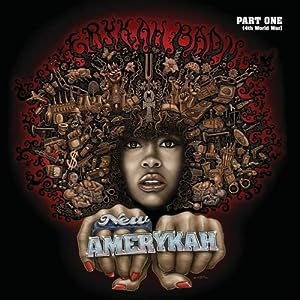 $5.24
As of 2022-11-27 03:01:59 UTC (more info)
Not Available - stock arriving soon
Buy Now from Amazon
Product prices and availability are accurate as of 2022-11-27 03:01:59 UTC and are subject to change. Any price and availability information displayed on http://www.amazon.com/ at the time of purchase will apply to the purchase of this product.
See All Product Reviews

Universal Motown's multi-platinum-selling, Grammy awardwinning singer/songwriter/actress Erykah Badu returns to the music scene with her new album "New Amerykah" featuring the debut single "Honey". Laced with Erykah's bluesy grit and MC style vocals, the song is bolstered by producer's 9th Wonder's razor sharp hip hop beats. Badu describes the song as "an old school track with some funk on it." The release of "Honey" on November 20th also marks Badu's 10th year in the music industry. To celebrate, the gifted trendsetter prepares the release of her much anticipated new album on her birthday, February 26th. Badu has enlisted some of the most talented, groundbreaking underground producers and engineers in the hip-hop game to support her breakthrough return, including Grammy Award winning producer 9th Wonder (Jay-Z, Nas, Mary J. Blige), Madlib, Mike "Chav" Chavarria and R&B singer Bilal. A special, 12-inch pink wax edition will be available only to DJ's next month and will feature underground tracks, "The Healer" and "Real Thang." "The music is the star," says Erykah, "I just laid down my vocals and let the music breathe while the melodies tell the stories." This album is part one of the series New Amerykah Part 1&2.

Subtitled 4th World War (when was the third, eh?), New Amerykah Part One is the first release in five years from the woman born Erica Wright. The wait was worthwhile though, as this smart, eclectic set, her fourth, adds to the grand tradition of socially conscious soul music. Literally so in the case of opener "Amerykahn Promise", spun by Badu straight over an obscure seventies funk track by Roy Ayers's protégés Ramp. "The Healer" is effectively a tribute to the power of hip hop to ground otherwise lost lives, while the deeply felt "Telephone" commemorates her friend, the late producer J Dilla (and was in fact written the day after his funeral). "The Healer" and "That Hump" deal with the damage caused by drug dependency and "Soldier" is a hard-hitting analysis of the state of Black America. None of which would count for much if the music didn't connect. Though Badu's quirks remain intact--the vocal/saxophone duet at the conclusion of the otherwise ice-cool "Me" (what else) is easily resisted--a terrific team of collaborators including idiosyncratic producers Madlib, 9th Wonder and the three man unit Sa-Ra keep New Amerykah Part One endlessly imaginative, tough, twisted beats sitting alongside softer jazz-funk grooves. The US public certainly assented, sending New Amerykah towards the top of the album charts. Only the eighties-style slow jam "Honey", charming in itself, seems at odds with the serious mood and is thus tagged on the end. The now eagerly anticipated Part Two is due later this year. --Steve Jelbert