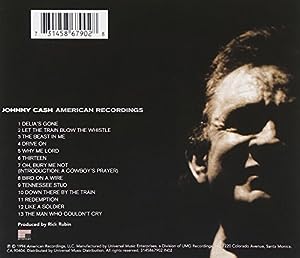 $12.79
As of 2022-08-15 16:14:46 UTC (more info)
Not Available - stock arriving soon
Buy Now from Amazon
Product prices and availability are accurate as of 2022-08-15 16:14:46 UTC and are subject to change. Any price and availability information displayed on http://www.amazon.com/ at the time of purchase will apply to the purchase of this product.
See All Product Reviews

Out of print in the U.S.! Johnny Cash had already recorded some of the most important Country albums in the history of the genre, yet, although he was still making quality music throughout the '80s, record sales and label support were the lowest he'd ever experienced in his entire career. By the early '90s, he was without a label for the first time in four decades. Longtime fan, label owner and producer Rick Rubin stepped in, asked Johnny to return to his roots and together, they re-created the legend of the Man In Black. Features Cash performing his own compositions as well as songs from Loudon Wainwright, Leonard Cohen, Nick Lowe, Tom Waits and Glenn Danzig. American Recordings earned Johnny a 1995 Grammy Award for Best Contemporary Folk Album. A stunning return to form. Warner.

In 1994 Cash stunned the music world with this commanding collection of 13 solo acoustic performances that roll from gospel to cowboy to sarcastic folk. Minimalism had long been Cash's meal ticket, but this time around, producer Rick Rubin stripped it all away, recording the bulk of the record in Cash's cabin or his own living room (two cuts were captured live at the Viper Room in front of an emphatic audience). Cash offers five typically direct and vivid originals, but he also seizes control of songs by Kris Kristofferson, Nick Lowe, Leonard Cohen, Tom Waits, and Loudon Wainwright. Forty years after "Hey Porter," Cash delivers a pure, naked, and incredibly moving record that, dare we say, rivals the impact of his greatest achievements. --Marc Greilsamer

only $5.59
Not Available
View Add to Cart

The Way of the Fist

Eyes On The Lines