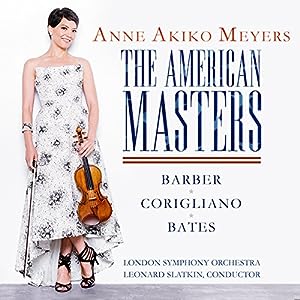 $11.97
As of 2022-09-29 03:53:46 UTC (more info)
Not Available - stock arriving soon
Buy Now from Amazon
Product prices and availability are accurate as of 2022-09-29 03:53:46 UTC and are subject to change. Any price and availability information displayed on http://www.amazon.com/ at the time of purchase will apply to the purchase of this product.
See All Product Reviews

On September 30th, celebrated violinist Anne Akiko Meyers will release The American Masters internationally on eOne. This recording, her 30th, features world premieres of two pieces written for her: Mason Bates s Violin Concerto and the Lullaby for Natalie by Oscar and Grammy Award winning composer John Corigliano. Samuel Barber's Violin Concerto, a staple of the violin repertoire, and the most popular American concerto for violin and orchestra is also featured on this recording. Leonard Slatkin, a champion of all three composers, conducts the London Symphony Orchestra.

From the 1960s until his death in 1981, Samuel Barber was a generous mentor to John Corigliano, who is one of todays foremost composers, having received the Pulitzer Prize, an Academy Award, the Grawemeyer Award, and a Grammy Award. Corigliano wrote the Lullaby for Natalie for the birth of Anne Akiko Meyers' first child. Corigliano, one of today s foremost composition teachers, counts Mason Bates as one of his leading students. Bates is one of the most frequently performed composers of his generation, composer-in-residence with the Chicago Symphony Orchestra and a 2012 recipient of the prestigious Heinz Award. Bates s Violin Concerto, co-commissioned by the Pittsburgh Symphony and Anne Akiko Meyers, has been performed with the Pittsburgh, Nashville, Detroit, Richmond and Chicago Symphony Orchestras since its world premiere in December 2012.

The American Masters album was recorded on the Ex-Vieuxtemps Guarneri del Gesu violin, dated 1741, which is considered by many to be the finest sounding violins in existence. Anne Akiko Meyers has been awarded exclusive lifetime use of this instrument.

Christmas Eve and Other Stories by Lava ...