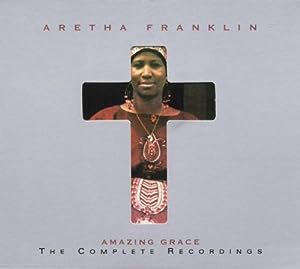 $23.86
As of 2021-09-17 12:49:54 UTC (more info)
Not Available - stock arriving soon
Buy Now from Amazon
Product prices and availability are accurate as of 2021-09-17 12:49:54 UTC and are subject to change. Any price and availability information displayed on http://www.amazon.com/ at the time of purchase will apply to the purchase of this product.
See All Product Reviews

Aretha's awe inspiring (and Grammy winning) 1972 gospel album ascended to #7 on the pop album charts and featured legendary performances of How I Got Over; You've Got a Friend , and her charting rendition of Wholy Holy . This 2 CD set presents, for the first time, the entire unedited performance at 27 tracks, it's nearly double the length of the original release!

This Rhino re-release of Amazing Grace is at least as much a work of love as of marketing. The sound is beefier and clearer, but most importantly, the two-day church sessions are included. So, there's much more church (specifically, Reverend James Cleveland's marvelous orating) on the record, as well as contemporaryisms such as a cool organ rendition of George Harrison's "My Sweet Lord." Originally released as a double LP in 1972, Amazing Grace cracked the Billboard Top 10 on its release, making it one of the best selling gospel records of all time. Grace was recorded in a large Baptist church with an ultraenthusiastic audience in the pews, a full, funky band, and the Southern California Community Choir under the direction of Franklin's mentor, Cleveland. Her voice is melismatic and intensely emotional, yet pure and controlled, as if she is channeling the Holy Ghost. Franklin's father, the brilliant preacher Reverend C.L. Franklin, makes a brief, proud appearance, remarking, "She has never left the church!" Other highlights include the beautiful "Wholy Holy," an 11-minute, heart-stopping "Amazing Grace," and Inez Andrews's stirring "Mary, Don't You Weep." Way more than a return-to-the-roots record, this set is an inspired gospel-soul workout that arguably showcases Franklin's strongest singing ever. --Mike McGonigal

only $4.43
Not Available
View Add to Cart