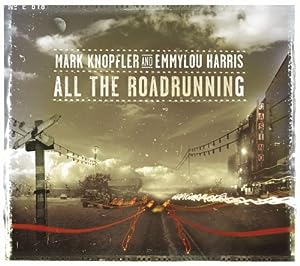 $23.95
As of 2022-11-27 05:53:16 UTC (more info)
Not Available - stock arriving soon
Buy Now from Amazon
Product prices and availability are accurate as of 2022-11-27 05:53:16 UTC and are subject to change. Any price and availability information displayed on http://www.amazon.com/ at the time of purchase will apply to the purchase of this product.
See All Product Reviews

For several years, the iconic Mark Knopfler and Emmylou Harris have been quietly recording a remarkable collection of duets whenever the Grammy winning artists could steal away from their own illustrious careers. The extraordinary result is All the Roadrunning. The songs from their Nashville sessions, all originals, while undeniably modern, have the appeal of classics, whether country, Celtic flavored or gently soulful. All the Roadrunning is Knopfler & Harris making music and, as they lyric for "This is Us" puts it, making history.

Over the last seven years, Mark Knopfler and Emmylou Harris quietly recorded an album by stealing "a few precious hours of studio time here and there," as the ex-Dire Straits singer/guitarist puts it. Good thing they kept it largely under wraps--expectations would have pushed through the clouds, especially as Knopfler conjured 10 of the 12 cuts, and Harris, who writes potently, but little, contributed two ("Love and Happiness," "Belle Starr"). Yet now that it's here, All the Roadrunning--while beautiful--seems somehow underwhelming, and without a true centerpiece. Anyone familiar with the artists' famous catalogues would expect the repertoire to be poetic and brooding, and that Harris's ethereal soprano would add light to Knopfler's dark Prozac rumblings. But the surprise is that the album is too tame, never breaks out of its midtempo groove, and never takes any big chances.That said, there is much to like: The marital scrapbook romp of "This Is Us," the bluesy bickering of "Right Now," the wrenching poignancy of the 9/11-inspired ballad "If This Is Goodbye." Knopfler, ever the hypnotic guitarist, turns in some thrillingly droll and laconic vocals, and Harris brings the spirited coltishness of her early work to "Belle Starr." In the end, though, this is not so much a duet album as two famously melancholy musicians singing together--at times, strikingly so. --Alanna Nash

only $7.87
Not Available
View Add to Cart

A Whole Lot More To Me