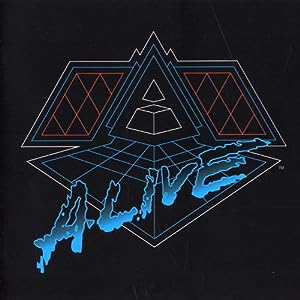 $5.48
As of 2022-09-27 02:20:24 UTC (more info)
Not Available - stock arriving soon
Buy Now from Amazon
Product prices and availability are accurate as of 2022-09-27 02:20:24 UTC and are subject to change. Any price and availability information displayed on http://www.amazon.com/ at the time of purchase will apply to the purchase of this product.
See All Product Reviews

Recorded at the Palais Omnisports de Paris-Bercy, an 18,000-capacity sports arena in Paris, on June 14th, 2007. The CD captures the exuberant multi-media spectacle of Thomas Bangalter and Guy-Manuel de Homem-Christo's first hometown show in 10 years in front of a capacity crowd of thrilled fans.

For fans of brazen electronic music, few acts offer the longevity, consistency, and booty-shakin' insistence of Daft Punk. In a kind of tenth anniversary celebration of the Parisian duo's limited-edition live album Alive 1997, Alive 2007 captures a long and sweaty concert performed before 18,000 hometown fans. There's almost nothing by way of original material here, though the performance culls all of Daft Punk's many notable singles from their uncompromising debut, Homework, the merciless Human After All; and the opulent, seminal Discovery (including lead single "Harder, Better, Faster, Stronger," which garnered renewed fame as the predominant sample buoying "Stronger," from rapper Kanye West's third album, Graduation). Regardless, devoted Parisians had weathered a full decade without a live performance, and the ecstatic, roof-raising release captured in this recording testifies to Daft Punk's inimitable position as one of the world's top electro-house phenomena. More importantly, perhaps, by fusing two or more "songs" per "track," Alive 2007 pulls off what 2003's remix/rarities album, "Daft Club," could not: namely, mixing the band's back catalogue with the kinetic fervor it deserves. At the end of the day (or the decade), no one does Daft Punk like Daft Punk. --Jason Kirk

Peace Is the Mission

only $6.75
Not Available
View Add to Cart