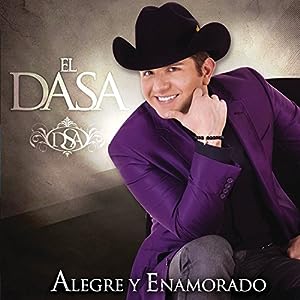 $17.25
As of 2022-06-21 01:44:01 UTC (more info)
Not Available - stock arriving soon
Buy Now from Amazon
Product prices and availability are accurate as of 2022-06-21 01:44:01 UTC and are subject to change. Any price and availability information displayed on http://www.amazon.com/ at the time of purchase will apply to the purchase of this product.
See All Product Reviews

Latin Grammy nominee, El Dasa, presents his second studio álbum titled Alegre y Enamorado . The 14 track album is filled with collaborations from famous composers and new talents, all inspired on the short life of El Dasa. Recorded in Los Angeles and his native Sonora, Mexico, Alegre y Enamorado includes the hit singles Por Ser Bonita and Mi Amiga, Mi Amor, Mi Amante . With this álbum El Dasa shows his talent and charisma which have made him one of the great young Regional Mexican acts of this time.
Originally from Sonora, Mexico, El Dasa is a young and promising artist that was discovered by the legendary Vicente Fernandez. Starting his career as the vocalist of a group called Banda Costa Azul , he quickly showcased his promising musical career. In his short career he has shared stages with important artist such as La Arrolladora Banda El Limón, El Coyote Y Su Banda, and Grupo Laberinto. El Dasa was the 2014 Winner of the Premio Lo Nuestro for New Regional Mexican Artist of the Year and the 2013 Premio de la Radio Winner for Best Dance Song of the year for Mentirosa . In 2013, El Dasa was participated on Univision s primetime television show Mira Quién Baila .