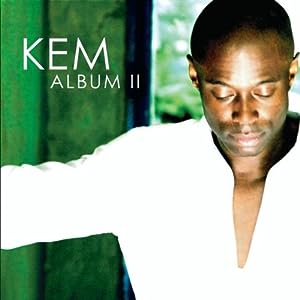 $7.34
As of 2021-04-16 00:34:26 UTC (more info)
Not Available - stock arriving soon
Buy Now from Amazon
Product prices and availability are accurate as of 2021-04-16 00:34:26 UTC and are subject to change. Any price and availability information displayed on http://www.amazon.com/ at the time of purchase will apply to the purchase of this product.
See All Product Reviews

Once again, KEM II finds the artist taking full control of writing, arranging and producing responsibilities. With poignant, passionate tracks on the album such as 'Back In My Life', 'Set It Free' and 'Heaven', beyond a shadow of a doubt, KEM proves that listeners will reach new heights through his music. The first single is sensual cut, 'I Can't Stop Loving You'. Motown. 2005.

Kem plays his soul-and-jazz-juiced R&B like a man who has lived through more than most of us, and indeed he has: As fans who have followed the back story since his 2003 debut, Kemistry, know, he's an artist who was once reduced to sleeping on Detroit park benches while battling addiction. With the release of Album II, though, the sad stories need circulate no longer—all that's required to get swept up, off, and away by these tracks is a taste for solid R&B minus the hip-hop sideshow. Coaxing vocal cords more pliable than the face of Jim Carey into unexpected directions, the Chaka Khan sound-alike—who also occasionally ventures into George Benson territory—showers tenderness over each of these songs, sauntering into some notes with suave sophistication and sneaking up on others. Though "I Can't Stop Lovin' You" is the song throwing sparks amongst the quiet storm crowd, check his stretchy tenor on "Into You" and "I'm in Love," both so deeply felt they'll send the lovelorn swooning. --Tammy La Gorce