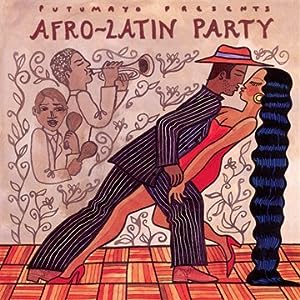 $16.98
As of 2021-09-19 13:19:20 UTC (more info)
Not Available - stock arriving soon
Buy Now from Amazon
Product prices and availability are accurate as of 2021-09-19 13:19:20 UTC and are subject to change. Any price and availability information displayed on http://www.amazon.com/ at the time of purchase will apply to the purchase of this product.
See All Product Reviews

Croatian salsa, Cuban ska, and Oregonian mambo!?!? These are three of the unlikely gems listeners will find on Afro-Latin Party. What started out as an effort to provide the perfect soundtrack to a Latin dance party became a tribute to the global appreciation and realization of the musical ricochet between Cuba and Africa.

Central to the Afro-Latin phenomenon is Africando, who provide three songs on Afro-Latin Party, each with a different African lead singer. In the 1960s and 1970s, the biggest names in African music—including such heavyweights as Youssou N’Dour and Salif Keita—were performing Latin music, thanks to recordings that came over from abroad. Cultural exchange between Cuba and the socialist governments in Mali and other parts of West Africa was a regular phenomenon. Performers like the Fania All Stars and Celia Cruz toured Africa and became musical icons.

In 1992, legendary Africando founders Ibrahim Sylla and Boncana Maïga traveled to New York to record with top local salsa musicians, many who were taken by surprise by these Africans performing and their phonetically learned Spanish lyrics. Interestingly, many of the band members on the three Africando tracks here, also play on other tracks on Afro-Latin Party.

There's plenty of food for thought in Putumayo's delicious new Afro-Latin Party. Like the previous Putumayo compilations Afro-Latino and From Congo to Cuba, the 10 tracks here document the fascinating musical marriage between Africa and Cuba that has seen the original African rhythms brought to Cuba by slaves evolve and migrate back east across the ocean to influence a new generation of African music (and in the process produce offspring everywhere from Croatia to Portland, Oregon). But that almost implies that the disc is of interest to musicologists only, when quite the opposite is true. Afro-Latin Party is anchored by three tracks from Africando, the Cuban supergroup that records with different African lead singers, and their seamless blend of African and Carribbean spices nicely sets the tone for the disc. With Pepe and the Bottle Blondes' wry take on classic cha-cha, "Cuentame Que Te Paso" (featuring a former lead singer for Pink Martini) rubbing shoulders with classic-style salsa from Croatia's Cubismo ("Morenita") and Puerto Rico's Jose Mangual Jr. (the white-hot "Ritmo Con Ache"), the disc is an excellent primer on the global reach of salsa music, but more importantly one that sounds best blasting out of speakers that aren't too far from the dance floor. --Ezra Gale

Shoot Out the Lights

"I Will Not Stop Singing"