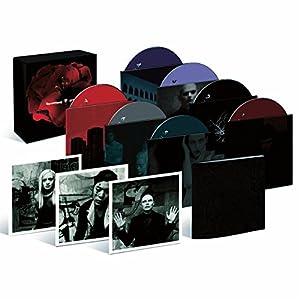 $75.27
As of 2021-04-15 09:27:32 UTC (more info)
Not Available - stock arriving soon
Buy Now from Amazon
Product prices and availability are accurate as of 2021-04-15 09:27:32 UTC and are subject to change. Any price and availability information displayed on http://www.amazon.com/ at the time of purchase will apply to the purchase of this product.
See All Product Reviews

More than 15 years after its original release, the Smashing Pumpkins' Adore, will be reissued as a Super Deluxe 6CD/1DVD set that features 107 tracks including rarities, demos and outtakes along with a complete 1998 live show video from Atlanta's Fox Theater. Among the previously unreleased tracks is the never-before-available 'Blissed and Gone' which fans may recognize as the melody heard briefly as the final track on the original album. The Smashing Pumpkins' Adore, the follow up to the band's mega-successful 1995 double album Mellon Collie and the Infinite Sadness, offered a new entrance to the band's career as Corgan experimented with and without the band.

This Super Deluxe package not only features the original album remastered and a mono version of the album, but includes a full booklet with liner notes by Rolling Stone writer David Wild. Capturing a transitional period in the Smashing Pumpkins' history, Billy Corgan was glad to revisit the songs from this highly-personal album. Adore will also be available as a single CD, a double-LP and a 90-track digital deluxe.

The Best of Joe Cocker

only $7.10
Not Available
View Add to Cart