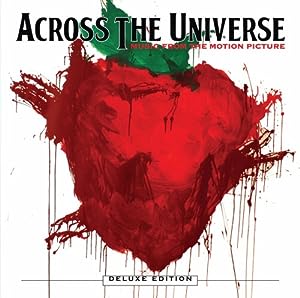 $11.65
As of 2021-07-16 05:22:18 UTC (more info)
Not Available - stock arriving soon
Buy Now from Amazon
Product prices and availability are accurate as of 2021-07-16 05:22:18 UTC and are subject to change. Any price and availability information displayed on http://www.amazon.com/ at the time of purchase will apply to the purchase of this product.
See All Product Reviews

A love story set in the 1960's amid the turbulent years of anti-war protest, mind exploration and rock `n roll. Jude (Jim Sturgess) and Lucy (Evan Rachel Wood), along with a small group of friends and musicians, are swept up into the emerging anti-war and counterculture movements with "Dr. Robert" (Bono) and "Mr. Kite" (Eddie Izzard) as their guides.

Package art will incorporate stills from pivotal scenes from the movie and a 16-page folder foldout poster with a strawberry image.

Given a track record littered by misfired oddities like the Bee Gees starring in the 1978 movie version of Sgt. Pepper's Lonely Hearts Club Band, successfully transforming The Beatles' epochal oeuvre into film musicals has been an elusive alchemy. Yet director Julie Taymor's 1968-centered, socio-political romance is more than just a stunning visual achievement. Its soundtrack brings a crucially intimate, emotionally engaging sensibility to its rich catalog of Beatles source material. Using an approach she rightly dubbed "organic," Taymor never gets too ambitious with the original arrangements, balancing the plaintive, often stark performances of central young stars Jim Sturgess and Evan Rachel Wood with equally compelling turns by supporting players Carol Woods and Joe Anderson. The stars successfully evoke early Beatlemania via the energetic charms of Sturgess' "All My Loving" and Wood's "It Won't Be Long," then get straight to the canon's often melancholy heart on his take of "In My Life," and her gentle cover of "Blackbird." Taymor's use of star turns--the entire point of too many Beatles-rooted projects--is as sparing as it is deft. Eddie Izzard's effusive "Being for the Benefit of Mr. Kite" is the product of several edited improvisations, while U2's Bono and Edge re-imagine "Lucy in the Sky With Diamonds" by way of Pink Floyd. Joe Cocker's swamp-dirge "Come Together" shows why he's long been one of the best interpreters of the Lennon-McCartney catalog, and Dana Fuchs alternately evokes the heavenly and hellish via her tender "Dear Prudence," as well as her manic, Joplin-channeling burn through "Helter Skelter." Elsewhere on the CD, Bono teams with Secret Machine for the straightforward "I Am the Walrus," while the Dallas indie rockers also take dream-pop turns on the instrumental "Flying" and George Harrison's haunting "Blue Jay Way." Remarkably, Taymor claims the bulk of the performances here were not lip-synced, but recorded live as the cameras rolled.--Jerry McCulley

Midnight In The Garden Of Good And Evil:...