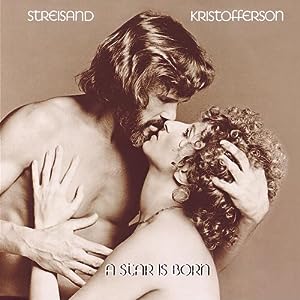 $7.98
As of 2022-09-27 02:07:02 UTC (more info)
Not Available - stock arriving soon
Buy Now from Amazon
Product prices and availability are accurate as of 2022-09-27 02:07:02 UTC and are subject to change. Any price and availability information displayed on http://www.amazon.com/ at the time of purchase will apply to the purchase of this product.
See All Product Reviews

Soundtrack to the 1976 film remake starring Streisand & Kris Kristofferson. The film won the Academy Award for Best Original Song for "Evergreen" with the award shared by it's songwriters, Streisand & Paul Williams. The soundtrack went number one on the charts for six weeks.

Hollywood loved this story so much they remade it every 20 years or so for much of the 20th century; Barbra Streisand imbued it with so much forceful persona in 1976 that they haven't touched it since. The romantic/musical pairing of Streisand and Kris Kristofferson (chosen when no less than Elvis Presley turned the role down) may have been one of the era's strangest but, anchored by Streisand's elegant, Oscar-winning hit theme "Evergreen," it nonetheless yielded the biggest-selling album of the singer's career to date. That neither star is particularly convincing as rock icons--particularly Her Divaness--seems beyond the point of this fable. Instead, both stars take the opportunity to stretch outside their usual personas a bit, Streisand with the R&B teaser "Queen Bee" and confessional "Woman of the Moon," Kristofferson on rousing, theatrical fare like "Watch Closely Now" and "Hellacious Acres." --Jerry McCulley