A Fever You Can't Sweat Out from Decaydance 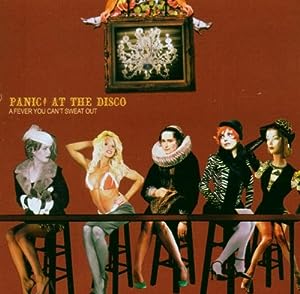 A Fever You Can't Sweat Out from Decaydance

$6.79
As of 2023-01-29 12:54:56 UTC (more info)
Not Available - stock arriving soon
Buy Now from Amazon
Product prices and availability are accurate as of 2023-01-29 12:54:56 UTC and are subject to change. Any price and availability information displayed on http://www.amazon.com/ at the time of purchase will apply to the purchase of this product.
See All Product Reviews

Description of A Fever You Can't Sweat Out by Decaydance

Top40 Music Store are proud to present the fantastic A Fever You Can't Sweat Out.

With so many available right now, it is good to have a name you can trust. The A Fever You Can't Sweat Out is certainly that and will be a great acquisition.

For this great price, the A Fever You Can't Sweat Out is widely recommended and is always a popular choice amongst lots of people. Decaydance have included some excellent touches and this equals great value for money.

This Las Vegas band strives to create a unique sound by blending melody-driven rock with dance. This is a rock record you can dance to; that's fun and sincere at the same time. Produced by Matt Squire (Northstar, The Explosion, The Receiving End Of Sirens). Panic! At The Disco is the first band signed to Pete Wentz's (Fall Out Boy) Decaydance Records, a Fueled By Ramen imprint label. "...Imagine The Faint meets The Postal Service with all of the pop sensibilities of a Blink 182" - Peter Wentz. Touring with Fall Out Boy, The Starting Line, Motion City Soundtrack, and Boys Night Out this fall.

Barely out of high school when signed as the first act for Powered By Ramen's new Decaydance imprint, guitarist Ryan Ross and drummer Spencer Smith of Panic! at the Disco had previously cut their musical teeth in a local Las Vegas Blink 182 cover band. It's that familiar, contempo-punk-pop sensibility, bolstered by the amped-up emo-core ambitions of singer Brendan Urie (typified by the snarky gem "The Only Difference Between Martyrdom and Suicide is Press Coverage") that dominates the opening tracks of the album. It's a shrewd hook, one the band steadily expands -- sonically and lyrically -- thereafter. The nervous energy of "London Beckoned Songs About Money Written By Machines" is set off by sonic embroidery that's sounds as intriguing as the vocoder shtick of "Nails For Breakfast..." does dated. Yet "Camisado" quickly shakes up Supertramp's prog-pomp with a double-shot of modern punk-pop smarts, an alchemy the band and producer Mint Squire performs with similarly inventive, genre-blurring ambition (complete with a quasi-Grand Guignol "Intermission" nearly worthy of Queen) on "Lying is the Most Fun..." and such standouts as "But Its Better If You Do" and the arch delight "Build God, Then We'll Talk." Too many young bands are content slaves to fashion; this one has forged a promising debut by shrewdly taking fashion hostage, then standing it firmly on its head. -- Jerry McCulley

PANIC AT THE DISCO A FEVER YOU CAN`T SWEAT OUT

Love In the Modern Age

only $4.33
Not Available
View Add to Cart