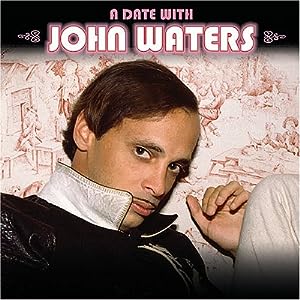 $4.50
As of 2023-01-23 21:00:19 UTC (more info)
Not Available - stock arriving soon
Buy Now from Amazon
Product prices and availability are accurate as of 2023-01-23 21:00:19 UTC and are subject to change. Any price and availability information displayed on http://www.amazon.com/ at the time of purchase will apply to the purchase of this product.
See All Product Reviews

In the liner notes to Waters writes 'Come on Over, Let's listen to some tunes. Have a seat on my sofa. Think I invited you over here to discuss the future of independent film? Hell no, I'm looking' for a little action'. The album is a heartfelt and touchingly bizarre compilation of love songs selected by the legendary filmmaker himself. This is the album follows up to Waters' Christmas album (scanned over 25,000) 'Go ahead, turn up the v volume. Feel like go-go dancing? Hit it!' - John Waters.

History's already shown that the self-proclaimed master of "bad taste" has always had impeccably good taste, even at his most extreme. A large part of the reason that his aesthetic has had a real and unabated influence since the early 1970s is that there's nothing forced or ironic about his approach to film-making, including the soundtracks to his movies, which the director terms "little-known, weird vintage music." Waters says that the selections on A Date are "all romantic seduction music I would play if I had you over." Naturally, it's an off-kilter patchwork selection; most folks would not try to seduce someone with either an Ike & Tina Turner number or "Sometimes I Wish I Had a Gun," sung by Waters habitué Mink Stole. The collection is fun and veers from mellow crooners and hopped-up rhythm and blues to forgotten rocker hits from the '50s ("Tonight You Belong to Me" by Patience and Prudence) and '70s ("Jet Boy Jet Girl" by Elton Motello). If the collection sells well, the director promises to bring you Breaking Up with John Waters, as if you needed another reason to buy this one. --Mike McGonigal