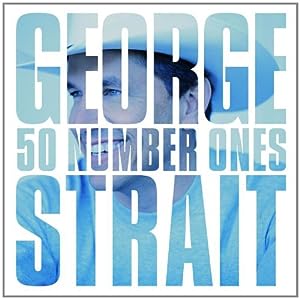 $7.81
As of 2022-06-30 01:34:46 UTC (more info)
Not Available - stock arriving soon
Buy Now from Amazon
Product prices and availability are accurate as of 2022-06-30 01:34:46 UTC and are subject to change. Any price and availability information displayed on http://www.amazon.com/ at the time of purchase will apply to the purchase of this product.
See All Product Reviews

For over twenty years George has remained at the forefront in an industry always looking for the fresh new thing. George's always consistent vocals, song quality and constant charm have continued to earn the respect of his peers and audiences alike. This first ever collection of George's 50 #1 career singles is a 2-CD set including 'I Hate Everything' the new single showing signs that George isn't satisfied with just 50 #1's.

When George Strait's "She'll Leave You With a Smile" moved to the top of the country charts in early 2003, the handsome Lone Star crooner bested Conway Twitty for the most No. 1 singles by a solo artist. This collection of 50 chart-toppers, spanning 22 years, showcases the Cadillac of country singers at his best, blending traditional and contemporary stylings, but never straying too far from the core of his Texas barroom sound. "Fool Hearted Memory," from 1982, proves that Strait had his uncluttered production and straightforward vocal approach down from the start, no matter how many producers guided him to his peak. Through the years, the path to superstardom dictated that he trade the crisp Western swing of "Right or Wrong" and "Ace in the Hole" for squishy, mid-tempo crowd pleasers like "Check Yes or No" and "Write This Down." But he redeemed himself with such poignant heartbreakers as "So Much Like My Dad" and "…Smile." This retrospective's one new track, "I Hate Everything," about a man in a bar who's besotted more from pain than whiskey, doesn't match up with the singer's best material, but it's still got that irresistible Strait hook: average-guy sincerity wrapped in a down-to-earth heart. --Alanna Nash

The Weight of These Wings