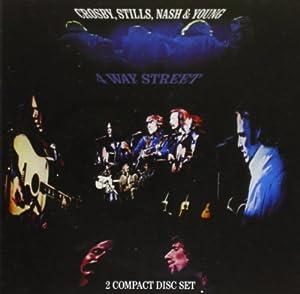 $11.12
As of 2021-12-02 14:16:33 UTC (more info)
Not Available - stock arriving soon
Buy Now from Amazon
Product prices and availability are accurate as of 2021-12-02 14:16:33 UTC and are subject to change. Any price and availability information displayed on http://www.amazon.com/ at the time of purchase will apply to the purchase of this product.
See All Product Reviews

CSN&Y managed to release this double-LP document of their 1970 tour before splintering into solo careers and short-lived reunions. This 1992 expanded edition adds four acoustic solo spots to the original 17 cuts including Teach Your Children; Triad; Cowgirl in the Sand; Long Time Gone; Southern Man; Ohio , and Carry On .

This is one of those albums where you'll want to cherry-pick favorites. Recorded live when the supergroup was at its commercial zenith, it's sloppy in spots where precision is called for. And the hyperbolic counterculture rants sound a bit silly these days (Bellows Stills: "Jesus Christ was the first nonviolent revolutionary! Ah, dig it, dig it!"). On the other hand, the electric jams are enlivened by some charged guitar skirmishes between Stills and Young. Those who owned the original 2-record set will be pleased by the additional Graham Nash song ("King Midas in Reverse") and Young's acoustic "The Loner"/"Cinnamon Girl"/"Down by the River" medley. --Steven Stolder

A Real Labour Of Love