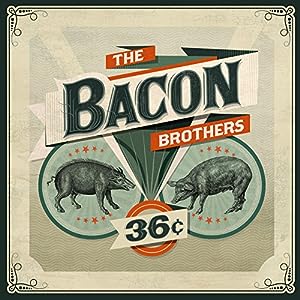 $13.96
As of 2021-04-15 09:23:24 UTC (more info)
Not Available - stock arriving soon
Buy Now from Amazon
Product prices and availability are accurate as of 2021-04-15 09:23:24 UTC and are subject to change. Any price and availability information displayed on http://www.amazon.com/ at the time of purchase will apply to the purchase of this product.
See All Product Reviews

Long before Kevin launched his prolific stage and screen career, and before Michael became known as a go-to composer for film and television, they were just two brothers growing up playing music together. Nearly 20 years ago, they decided to make it official and formed The Bacon Brothers.

Since then, the six-piece-band has toured regularly and produced seven CDs as well as a live DVD. The Bacon Brothers have appeared as special musical guests on A Prairie Home Companion, Craig Ferguson, Live with Kelly and Michael, VH1's Big Morning Buzz, and performed Guilty of the Crime with The Bellamy Brothers at the Grand Ole Opry on September 1, 2009 and they have done the Tonight Show and Jimmy Kimmel a number of times.

Playing approximately 50 shows per year, the band consistently sells out fan favorite venues like The Birchmere, City Winery, and Rams Head On Stage, while expanding into other regions and performing sold-out shows in new venues such as Gruene Hall. Their music, an infectious mix of rock, country, folk, and a little Philly soul, has fans dancing in their seats and singing along at every show.

36 cents is the bands newest offering and contains the soon to be classics Wonderful Day, 493 miles, and 36 ¢ and a Paul Weller cover featuring Daryl Hall

only $6.47
Not Available
View Add to Cart