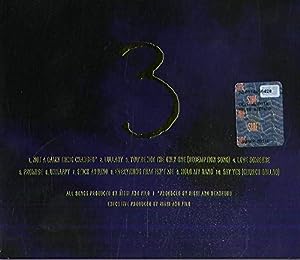 $5.97
As of 2022-06-20 01:23:41 UTC (more info)
Not Available - stock arriving soon
Buy Now from Amazon
Product prices and availability are accurate as of 2022-06-20 01:23:41 UTC and are subject to change. Any price and availability information displayed on http://www.amazon.com/ at the time of purchase will apply to the purchase of this product.
See All Product Reviews

3 serves as the follow-up to Lukas Graham's eponymous global debut, which racked up over 23 million units in worldwide consumption, saw "7 Years" hit number one in 13 different countries, and earned the band three GRAMMY®Award nominations - including both Record and Song of the Year.
While the self-titled debut was dedicated in large part to Lukas' late father, 3 is for his daughter and sees Lukas push deeper still, holding a magnifying glass up to his life, laying bare his vulnerabilities and his fears, his sadness and his joy.
Written and recorded almost entirely between September 2017 and April the following year, Lukas spent two months in Copenhagen before decamping to LA with his fiancé and daughter to finish the record alongside his long-term team-"his boys," producers Morten "Rissi" Ristorp, Morten "Pilo" Pilegaard, songwriter Stefan Forrest and engineer David LaBrel. Together they create a special kind of alchemy: easy pop hooks alongside soul-baring poignancy. Lukas says simply, "It's a more mature record, definitely, but it has more life in it."

Sing The Hits Of Michael Jackson

only $8.51
Not Available
View Add to Cart