20th Century Masters: The Best Of The Mamas & The Papas (Millennium Collection) 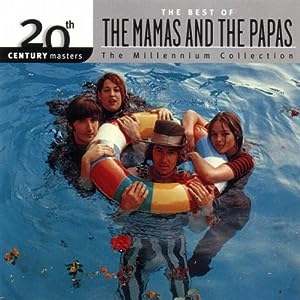 20th Century Masters: The Best Of The Mamas & The Papas (Millennium Collection)

$5.89
As of 2022-11-28 19:17:50 UTC (more info)
Not Available - stock arriving soon
Buy Now from Amazon
Product prices and availability are accurate as of 2022-11-28 19:17:50 UTC and are subject to change. Any price and availability information displayed on http://www.amazon.com/ at the time of purchase will apply to the purchase of this product.
See All Product Reviews

A dozen Mamas & Papas essentials including all their biggest '60s hits: Monday, Monday; Dedicated to the One I Love; California Dreamin'; Creeque Alley; I Saw Her Again; Look Through My Window; Dancing Bear; Dream a Little Dream of Me , and more.

The Mamas and the Papas blazed across the '60s folk-rock scene, scoring nine Top 40 hits in less than two years. So bright was their brief run that it earned them a berth in the Rock & Roll Hall of Fame. This set shows at least some of the reason why--there's the era-defining hit "California Dreamin'," plus other triumphs such as "Monday, Monday," "Words of Love," "Dedicated to the One I Love," and the autobiographical "Creeque Alley." Perplexingly, the 20th Century Masters set substitutes "Dancing Bear" for "Glad to Be Unhappy," which was a bigger hit. Then too, the set is skimpy compared to their previously released Greatest Hits, but it does win points for including two Cass Elliot solo hits, "Make Your Own Kind of Music" and "Dream a Little Dream of Me." --Daniel Durchholz

only $2.22
Not Available
View Add to Cart