10 Days Out: Blues from the Backroads 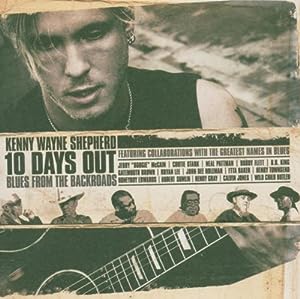 10 Days Out: Blues from the Backroads

$16.87
As of 2022-11-27 09:44:04 UTC (more info)
Not Available - stock arriving soon
Buy Now from Amazon
Product prices and availability are accurate as of 2022-11-27 09:44:04 UTC and are subject to change. Any price and availability information displayed on http://www.amazon.com/ at the time of purchase will apply to the purchase of this product.
See All Product Reviews

Kenny Wayne Shepherd's reverence for his musical roots are center-stage on Ten Days Out...Blues From The Backroads, a CD+DVD package that features the guitarslinger and Double Trouble rhythm section of bassist Tommy Shannon and drummer Chris Layton performing with some of the greatest blues players of our time as well as lesser-known but historically significant bluesmen. Traveling to their hometowns to record everywhere from juke joints to front porches, from New Orleans to Kansas, Shepherd celebrates and becomes part of blues history with Ten Days Out...Blues From The Backroads.

This "back-to-the-roots" road-trip documentary CD/DVD from blues-rocking guitarist Kenny Wayne Shepherd can be viewed in two ways--it's either the culmination of a long-held desire to promote and play with some unheralded blues veterans before they pass away (as six had already done since the recording was made, 2½ years before its early 2007 release) or a way to regain the blues audience Shepherd all but alienated on his artistically and commercially disappointing 2004 hard-rock release, The Place You're In. Ultimately, it succeeds on both accounts. Regardless of the project's inspiration, the results by and large justify whatever the means might have been to get this show on the road--literally and figuratively. Shepherd hit the highway for a week and a half along with producer Jerry Harrison (ex-Talking Heads), a portable studio, and backup musicians including the rhythm section from Stevie Ray Vaughan's Double Trouble. He searched out blues artists both obscure (the late guitarist Etta Baker, who plays in her kitchen, is a highlight) and better known (Clarence "Gatemouth" Brown and B.B. King) for a series of acoustic and electric jams, all of which feature Shepherd--who, to his credit, generally keeps his hot-dogging tendencies in check. A closing concert featuring members of Howlin' Wolf and Muddy Waters' bands never quite generates the heat it should, but country bluesmen Cootie Stark, Neil Pattman, and harmonica ace Jerry "Boogie" McCain provide plenty of sparks. Shepherd seems sincere enough, but the real stars are the ageing musicians who have maintained their chops and intensity through a lifetime of performing music that clearly comes from the soul. --Hal Horowitz

The Shape Of Blues To Come