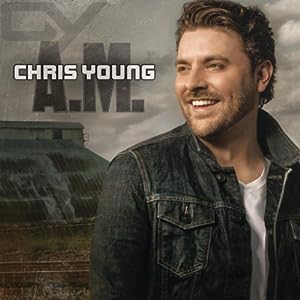 $1.95
As of 2022-06-20 03:37:04 UTC (more info)
Not Available - stock arriving soon
Buy Now from Amazon
Product prices and availability are accurate as of 2022-06-20 03:37:04 UTC and are subject to change. Any price and availability information displayed on http://www.amazon.com/ at the time of purchase will apply to the purchase of this product.
See All Product Reviews

For years, Chris Young's fans have raved about the incredible energy of his concerts. Now, with the highlyanticipated September 17 release of A.M. , the goldselling artist is poised to present a studio album that similarly reflects the power, fun, and high octane of his live shows. On A.M., his fourth studio album, Young serves up a perfect combination of hard-charging rhythms and romantic melodies, wrapped up in a production style that takes his energy up a notch. "Each album is like a time capsule and I can look at the songs on each of my albums and remember exactly why I wrote or recorded a particular song and why it was an important element of that particular album," confides Young. "The songs that comprise A.M., especially the tempo tracks, are reflective of the life I'm living right now and I love performing them live. I get to interact with the crowd in a totally different way than with ballads and utilize the whole stage to be part of the crowd."

YOUNG, who Entertainment Weekly named as one of the summer's best opening acts, spent the season on Brad Paisley's Beat This Summer Tour, thrilling old fans and earning new ones as the key middle act. Furthermore, the Tennessee native loves songwriting just as much as he loves performing - a talent that s well apparent on A.M. The album features six songs that Young co-wrote with some of Nashville's most respected songwriters, including Chris DeStefano and Ashley Gorley. The two collaborated with Young on the hard-partying title track and the pumping first single, "Aw Naw," a perfect mirror of his rowdy, infectious concert vibe.

only $9.09
Not Available
View Add to Cart